After yesterday’s lukewarm reception of the traditional jam Swiss roll, I asked the boy what he would prefer in terms of flavor.  He asked if there was a chocolate and caramel version that we could make?  I quickly pulled this recipe out of the stack:

Now before I get started with today’s challenge, I decided to indulge a bit and get some new kitchen gear. 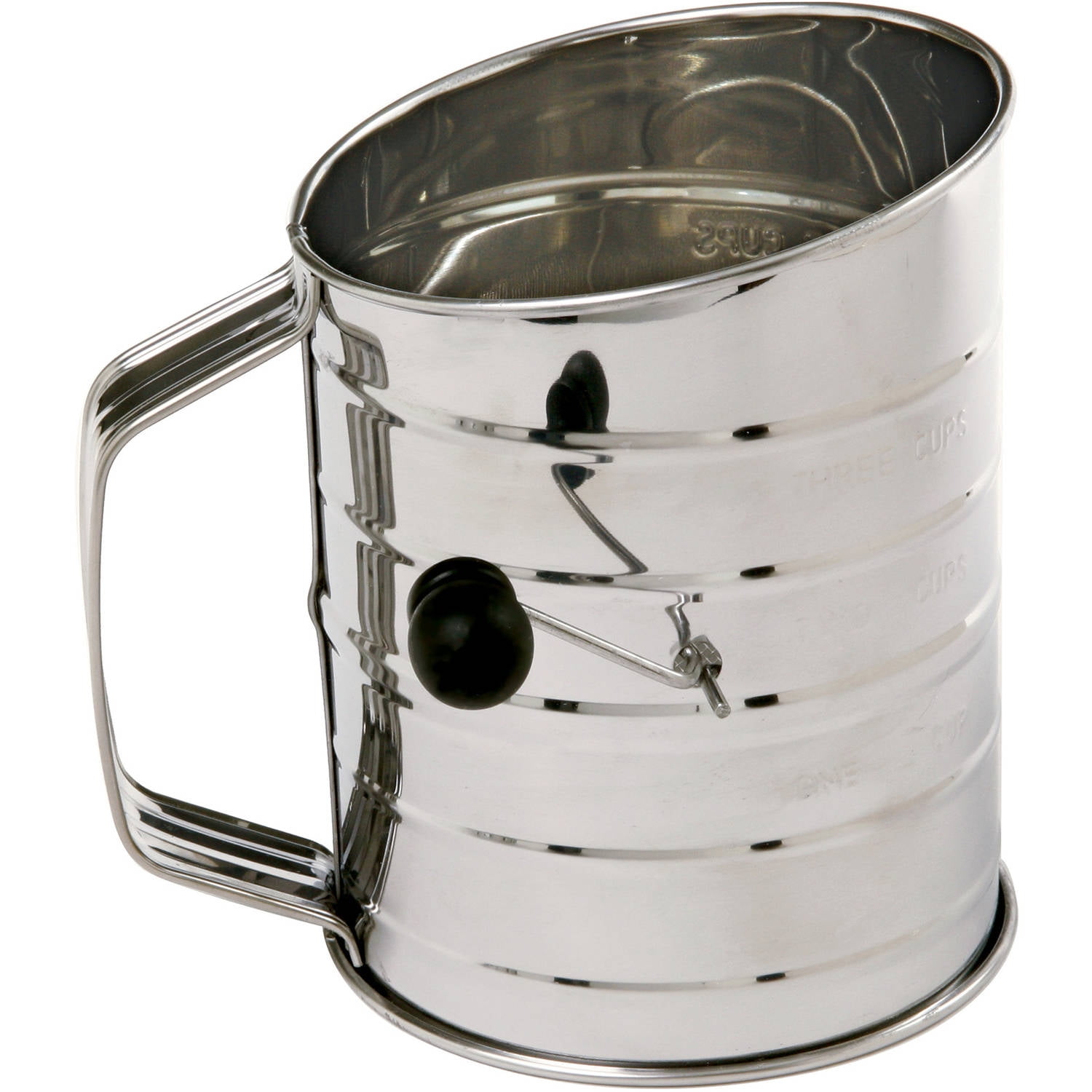 As I mentioned yesterday, a flour sifter was something I wanted to get.  I didn’t want to get one of those 1940s hand-crank sifters. Nostalgic, but impractical.

What I probably need is a chinois, which has a finer mesh, but I found this strainer and I think it’ll work just fine for what I need.

I also have a couple of whisks, but not silicone-coated, so these new ones will be great to prevent scratching the coated pots and pans.

So, onto today’s challenge….

Weigh your chocolate and put onto a double boiler to melt over low heat.  Seriously–low.  Remember, like Mary Berry says, chocolate will melt in a child’s pocket.  It doesn’t need much.

Note my redneck double boiler here.  I realize that I don’t have any small metal bowls….just this big popcorn bowl.  Gotta go look to see what they have at Goodwill.

Anyway, melt the chocolate and then take it off the heat and allow to cool.

Separate your eggs.  Take the yolks and the sugar and put them in your mixer and whisk them until they’re smooth and light.

Mix the yolky-sugar with the chocolate.  I dumped the yolks into the chocolate, but I probably should have done it the other way ’round.  I think it kinda started cooking the yolks because the chocolate hadn’t cooled down enough, but it did eventually turn into a chocolatey batter.

Then you’ll have to whip up the egg whites.  Now, I only have one mixer.  One bowl.  One whisk.  It’s 25 years old, so I don’t know if I can find extra parts, but I’m going to add that to my shopping list because having to stop to clean equipment between steps is NOT as much fun as it sounds.  But, I did it.  Quickly.

So whip up those egg whites until they’re stiff, but not dry.  I’m not sure what dry egg whites look like, but I think I may have almost achieved it.

Fold a big spoonful into the chocolate batter and mix it in, then add the rest until you have a smooth batter.  I added about 1/3 at a time.  I think the whole point of whipping the eggs first is to get a lot of air in the batter, like the previous recipe, but I had to mix a bit more vigorously to get the batter smooth, so I am a little concerned that I may have knocked a lot of the air out in the process.

Mix in the powdered chocolate by sifting and stirring it in, then pour into the prepared pan.

Then lick the spoon.  This is important.

While it’s baking, you can wash the mixer parts again because you’re gonna need it for the filling.

Take it out of the oven, cover it with a towel and let it cool completely.

Mine cracked in the oven….not sure if that’s just the way it goes, or if there was an issue with the cooking temperature or what.  I guess we’ll find out later!

This one threw me for a sec because it isn’t something we Americans are used to hearing.  “Double cream” is heavy whipping cream; “icing sugar” is powdered sugar; and “double cream icing sugar” is whipped cream frosting.  So…looking up how they make it, it looks like it’s:

You can vary the flavors by adding cocoa, instant coffee, lemon zest, orange zest, brandy or bourbon, minced nuts, or whatever you want.  For this dessert, I’m going with the plain old whipped cream frosting, although a cream cheese frosting would probably be even better…..but first the basics, then the alterations (a lesson some cooks never learn).

Benjamin wanted to have some caramel in his dessert, so I’m going to drizzle some inside and outside the cake.  I’m not going to MAKE the caramel…too advanced yet.  I’ll get there.

So….when the cake is completely cooled, you take another piece of parchment paper and sprinkle some powdered sugar on it.

Turn the cake onto it and peel the paper off the back of the cake.

Spread the whippy stuff nice and thick onto the cake.

I then drizzled some of the caramel sauce on it.

Using the paper, roll the cake up starting at the short end.

Place onto a serving plate…then discover that it’s underbaked.  And I probably could have put a little less whipped topping in it.  🙁  It kinda fell apart, but hopefully the boy will enjoy it anyway.  I actually want to start over and make another one, but I don’t have the energy to do that tonight.

PS – An additional challenge has been made.  The oven-mitt-gauntlet has been thrown!  British friend, Rob, says I will need to make a trifle with custard!  CHALLENGE ACCEPTED, MY GOOD MAN!  So….Recipe for Real Proper Custard:   https://www.bbc.co.uk/food/recipes/realpropercustard_65614