It’s already bleeding into the next week (BREAD WEEK!) so I have to finish up this last part ASAP.

The final challenge for biscuit week is a showstopper cookie structure; it has to be 3-D and it has to stand up (“which is more than can be said for the hosts tonight at the hotel bar,” says Sue Perkins).  Contestants needed something rigid and tastes good; nothing “instant”–everything made from scratch.  Ideas included:  hot chocolate, coffee, and mulled wine in the ski village; gingerbread & fondant rocket; brandy snaps and green tea gingerbread Hansel & Gretel scene; wholemeal oatmeal wild west town; monster scenes; sailboat scene; carousel; steam train; etc.  This can be gingerbread houses, but I thought I’d do something other than gingerbread.  I think maybe following Norman’s lead and make shortbread…yummy!

I’ve been doing a lot of studying on Tudor and Elizabethan culture and costumes, so naturally, I gravitated towards these images: 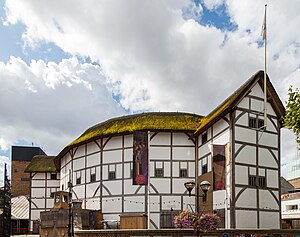 I’m thinking of doing the Tudor home (which is apparently a miniature, not a real structure).  I wonder if I can also create the famed Shakespearean Globe Theatre?  One thing that needs to be planned is the templates of the structures.  I will need to get together with my structural engineer to make sure that it’ll all fit together…

Next step is finding a recipe for the house.  Most shortbread has a short list of four simple ingredients:

One of the things that I always have issues with is the glue that holds it together.  I found this recipe for gingerbread house glue.  In short:

Easy peasy!  However, you have to use it as soon as you make it, so don’t make it before the cookies….unless you keep it under plastic wrap to keep it from drying out.

I mixed up the ingredients for the shortbread, which was made of:

I felt it needed just a little extra flour to make it a little less sticky, which I started trying to roll out with a rolling pin directly on parchment paper (which would make transferring it to the baking sheet as easy as possible), but again, too sticky.  I just pounded it out with my hands (leaving little dents where my ring is…probably should have removed that) until it was about “the thickness of a pound coin”…like I know what that is!  OK, it’s a little less than 1/4 inch.  I then baked them at 350 for about 20 minutes (give or take).  My experience is that no matter how accurately you cut the cookie templates, you’re going to have to trim them to size anyway.  They will swell and warp in baking, so cutting them in rough rectangles and trimming them down afterwards is the best way to make all the pieces fit together.  You can also avoid having burned tips and edges.  I didn’t trim down all the edges after baking, so everything is a little bit lopsided…and yes, the top story of the house snapped off on the back side.

The best way to trim them down is by using a large serrated bread knife and sawing them gently apart.  I didn’t do this for several of the base pieces, so nothing fits together particularly well.  I did trim the bottoms off so that the walls were roughly 90 degrees–they wouldn’t glue together otherwise!  We’ll see how well it stays together in the end.  Doesn’t matter–this is just for fun, right?

So the assembly commenced…and it was horrific.  I used sticks of butter and jars of Devon cream and custard to prop up the walls while the glue/frosting set (which worked quite well, so have a bunch of things around to help you erect the structure!), but all the walls were very lopsided and warped, not to mention brittle–probably because they were overcooked.  A couple pieces snapped off in my hands and the frosting and powdered sugar got everywhere, making everything in the kitchen sticky.

In the end, I was just so dissatisfied with the result of this epic home-building assignment, that I decided paint and details were just going to be a huge waste of time and effort.  Right now my Tudor house looks like the Weasley’s house, and is actually being held together by magic.  And by magic, I mean the frosting “glue” works!  I decorated with “cobblestones” on the back and with frosting timbers on the front.

However, the cookie tastes great and the skinny boy has declared he’s going to eat the entire house by himself.  Hopefully not all before dinner.